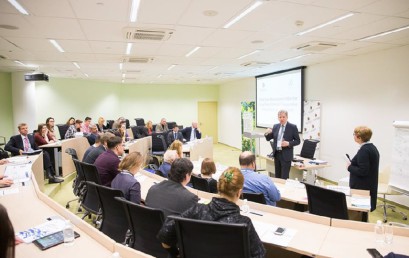 Moscow School of Management SKOLKOVO together with the European Forest Institute held an open lecture with the Former Prime-Minister of Finland Mr. Esko Aho and expert discussion on the topic “What Does Bioeconomy Offer For Long-Term Strategic Cooperation Between Europe And Russia”. The event took place at the campus of the Moscow School of […]

1st scientific meeting on complex plan of scientific research (CPSR) project development in the framework of the Program of fundamental scientific research of the state academies of science for 2013-2020 on the topic “Ecological, social and economic threats of forest degradation in Russia under global change and ways to prevent it” – CPSR “Forest” […]

Award for knowledge about forests popularization

Viktor Nefedyev, DSc in geography, researcher from CEPF RAS was awarded under nomination “Book for children” for his tales about Russian forest. Works of V. Nefedyev were supported by the commission of the award “Imperial culture” under nomination “Book for children” named after professor Eduard Volodin, “New book of Russia” journal, Ioann Zlatoust Fund […]

Scientific collaboration with colleagues from Belarus

An article “Twenty-five years after: forest or field?” by D. Ershov and E. Tikhonova summarizing results on the research of CEPF RAS scientists on abandoned agricultural lands reforestation was published in the newspaper of the national park “Smolenskoe Poozerye”.

The accreditation certificate of the state registry of the data base “Palynological pits and archaeological settlements of the South of West Siberian Plane” was received. Kharitonenkov under the supervision of Prof. O. Smirnova developed spatial and chronological data base in McAccess in the framework of his research on the role of humans in formation […]

Presentations: Ecology for everybody

Olga Smirnova, DSc in biology, Professor in CEPF RAS prepared series of presentations “Ecology for everybody: basis for nature conservation and restoration” devoted to fundamentals of two sciences: biosystem ecology and historical ecology.

The annotations of monographs of the CEPS RAS researchers are uploaded

The annotations of monographs of the CEPS RAS researchers are uploaded to the web-site.